Cookie Consent by FreePrivacyPolicy.com React vs Vue: Which Framework to Choose in 2022? React vs Vue: Which Framework to Choose in 2022?

The front-end developers prefer JavaScript the most due to its intelligent framework, libraries, massive functionality array, and easy development environment. When programmers plan to start a project, they prefer such a tool that can provide all the important functionalities and is easy to use.

Despite many debatable issues, as per the Stack Overflow Survey, 64.96% of professional developers prefer to use JavaScript. It is ruling the web development domain single-handedly and there are some amazing frameworks available like React and Vue.js.

React and Vue.js are in the dual battle when we talk about the popular frameworks in web development. Developers often find it confusing to select between these TWO JavaScript frameworks. Both the JS frameworks come up with their key interesting features and offer different approaches as per the business need. Both of them have pros and cons. It depends on the application where you, as a developer, are going to implement it.

Therefore, there is no clear winner of this debate. Both the frameworks offer higher performance and an easy learning curve, virtual DOM model and the component-based structure. The comparative study and in-depth analysis of this article will surely bring a clear thought about which framework you should use in your upcoming project to solve your business complications, the skill set of your developers, and their penetration in 2022.

React and Vue.js – What are they? 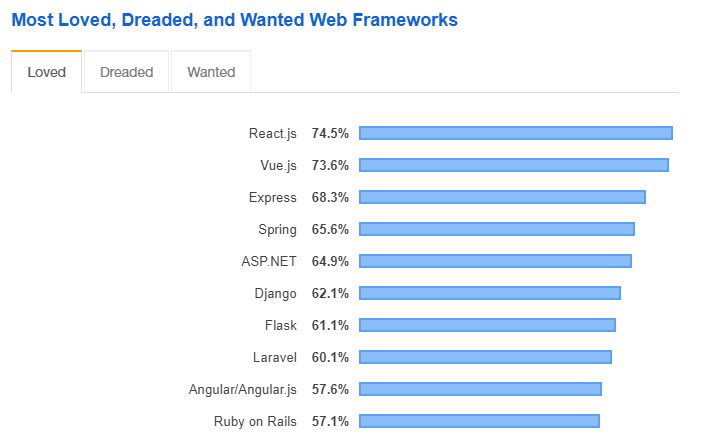 Before we start discussing comparative analysis, let's talk first about the basics of these two frameworks in brief. React and Vue.js both are JavaScript frameworks that are user-friendly and have a lot of specific features to make the task easy for web developers. As per the statistics, React has a JavaScript market share of 2.9% and almost 2.4% of all websites are using this framework. Whereas Vue.js is capturing 0.7% of the total JavaScript market share and 0.6% of websites are preferring this JS framework for their business.

React was first introduced by Facebook in the year of 2013 and is suitable for modern web development. Using this framework, developers have the flexibility to create complex UI and logic by using components and short isolated sections of code. React uses virtual DOM to interact with the HTML documents. Its programming style offers one-way data binding that boosts the speed of development.

On the other hand, Vue.js was first developed by Evan You in 2014. This is suitable for lightweight development and single-page applications. Vue.js offers two-way data binding and uses virtual DOM. The developing features and step-by-step migration procedure help developers to manage the project efficiently. With a comparatively smaller learning curve and basic knowledge of programming, you can decide where to use this framework in your business model.

What are the similarities in React and Vue?

As both the frameworks have some similarities in their features, tools, and communication aspects, let's have a quick look into the points.

What are the key differences between React and Vue?

Though we have briefed some similarities between the top two JavaScript frameworks, there are some major differences with respect to performance, architecture, documentation, and other aspects which make them unique in the field of application.

The major difference is the method used by React and Vue.js frameworks. Vue.js uses HTML templates and JSX whereas React only uses JSX, which can make things faster and easier but often simple things get complicated. On the other hand, React offers DOM manipulation, components, and component state management which are preferred by expert developers. New developers may not like such complications and prefer to work with simpler frameworks like Vue.js.

The comparative study of performance between the two frameworks shows that Vue.js is a little bit faster than React. React takes 100 kb whereas Vue.js operates on 80 kb. But this is not a significant differentiator. There is a concept of virtual and real DOM in JavaScript and both these frameworks are working on the virtual DOM environment making the performance almost similar.

Community support is one of the critical aspects when selecting the framework for your project. This motivates and attracts the new developers to work on the specific technology. Both Vue.js and React have strong community support and provide all the necessary support to their users.

The Facebook community has developed the React library which is massive in size and also reliable. There are also a lot of tools developed and maintained by the React community.

On the other hand, Vue.js is comparatively a new framework and created by an ex-google person, which doesn't have a big brand backup. Though Vue.js is becoming popular day by day, it will still take some time to reach that level.

When we talk about the web development framework, size really matters. The heavier it is, the slower it becomes. Practically, React is a little bit heavier than Vue.js and this makes it a little bit slower. React needs some third-party libraries to implement some features. Whereas Vue.js offers a lot of in-built features which is easy for the professional as well as the new web developers.

The way and time frame a developer needs to grasp and apply the particular framework is known as the learning curve.

React is easy to learn but mostly dependent on third-party components. This makes it a little bit difficult for the developers to learn a lot of things to complete a single work. It has a good documentation methodology.

If we discuss Vue.js, this new framework has considered all the issues faced by the developers and makes it very user-friendly. A long list of well-crafted FAQ lists helps the developers to get answers to all their queries.

React and Vue, Which one is more popular?

If we analyze all the statistics, React is undoubtedly the leader from the popularity point of view. It shows that the market also requires Dedicated React JS Developers for Hire. React is backed up by Facebook and the community support is also stronger than Vue.js. But the progress of Vue.js is noticeable since its inception.

A phenomenal platform, React Native is used for developing mobile apps both for android and iOS. It is very simple and easy to use.

But Vue.js is a little bit tricky as it is partnered with Weex, which is a cross-platform UI framework and works similarly to React Native. Currently, Weex is still in the development phase and more testing is to be done to reach the maturity phase.

Developers prefer a flexible framework to work for their projects. Both Vue.js and React offer a good amount of flexibility to their users.

React offers basic functionality only. To make it practical and usable, you need to expand its features. The additional libraries can extend the features of routing, application state management, server rendering, and specific web app development.

Vue.js, on the other hand, offers a bunch of standard tools and features to the developers that make the task easier for them. With the help of this facility, Vue.js is ahead of React in this race.

The above discussed TWO frameworks are the most famous ones to use and both of them are amazing in their applications. As we can see, there are no major differences between React and Vue.js, it's only the application where you want to use the specific one. React has huge community support and is backed by giants and is preferred by professional developers. Whereas, despite being a newbie, Vue.js is gaining huge popularity among JavaScript framework users lately. The blend of performance, features, response, and user-friendliness is the key to its massive growth.

Hope this article is going to help you in your framework selection. Share your viewpoints in the below comment box.