Top 10 Reasons To Choose Facebook ReactJS In 2022. As a developer, you might have used or heard about ReactJS at some point. Reactjs is often considered as a JavaScript framework like Vue.js or Angular but ReactJS is a frontend open-source library.

In 2011, it was first implemented in the news feed of Facebook and then Instagram followed its suit, from there several other websites or web apps started utilizing ReactJS. But what makes ReactJS popular among software developers and why should you choose it for your project in 2022?

React is a free, open-source, declarative, flexible, and efficient front-end JavaScript library that is used for developing UI-component based user interfaces.

ReactJS was first created by Jordan Walke at Facebook for large and complex web interfaces and single-page applications. According to the survey by Statista, 40.14% of surveyed developers prefer to use ReactJS for their projects.

Ever since it has been launched, ReactJS has taken the front-end development to the next, enhanced level. And around 2,000,000 websites are built using Facebook’s ReactJS. Some of the popular websites using React are Paypal, Netflix, Apple, Instagram and so many more. 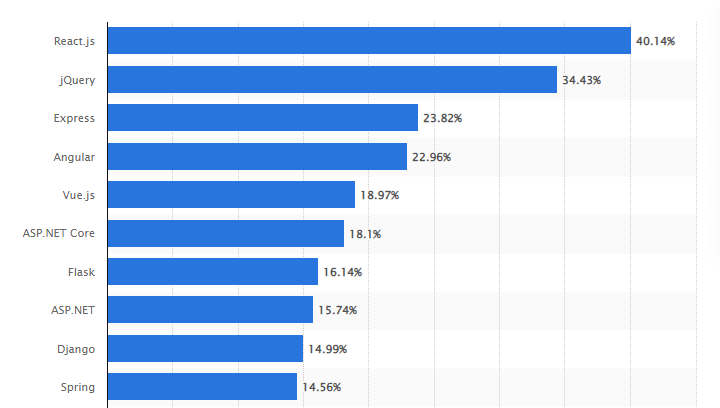 Here is th list of top 10 reasons to choose facebook ReactJS in 2022. Now that you know what ReactJS is, you might be wondering why you should use it. So, let’s look into some key reasons to choose ReactJS for your upcoming project’s front end.

We are not saying that you will learn ReactJS within a week, it can take a few months or a year to nail it. But, unlike Angular, you will not have to learn additional languages like typescript and ECMAScript 6 (ES6) to start working.

All you need to know before working with ReactJS is the basics of HTML, CSS and most importantly JavaScript, and the rest you will learn along the way.

Unidirectional data flow or one-way data flow means that data has just one way to be transferred to other parts of the application. It means that the child component cannot update the data that comes from the parent component.

In react, data that comes from the parent component is called props that ensures developers are following clean data flow, and you have better control over data. In ReactJS, unidirectional data flow means:

React uses component-based architecture. Components are a small feature that makes up a part of the UI. It can be a chat window, a comment feed, a dropdown, and so many others.

Each of these UI components exists within the same space but interact independently from each other. React allows you to build independent, reusable components.

But for a component to be reusable, it should take in data via props and return the result through function passed by props. Render prop is the function that is used to tell the component what content needs to be rendered and allows you to implement logic reuse in the component.

React Developers Tools are another reason why developers find ReactJS efficient to use. React developers tools are a series of frameworks, extensions, and libraries built to further simplify development in React.

As a front-end developer, you can use code generators, testing utilities, debugging extensions and other tools available for ReactJS to build more stable code and robust applications while reducing the development time. Several developer tools of React work as an extension on web browsers such as Firefox or Chrome.

Read: React vs Vue: Which Framework to Choose in 2022?

The virtual DOM is yet another concept that makes React more favourable for developers. VDOM is a programming concept that maintains an ideal representation of a UI in memory and is then synchronized with the actual DOM and the process of doing this is called reconciliation.

This approach allows the declarative React API that lets you tell React what state you want your UI to be in. It then makes sure the DOM matches this state. “Virtual DOM” often means different things to different people. In React, the term is often associated with the objects that represent the user interface.

React uses fibers to hold information related to the component tree. This briefs the event handling, updating manual DOM and attribute manipulation that would otherwise be used to develop the app by you.

Using ReactJS for UI development comes with a bonus, i.e, React Native. React Native combines the best part of native development with React. You can create the version of a platform-specific component that will allow a single codebase to share code across platforms.

Flux is yet another reason why developers use ReactJS. Flux is an application architecture that is used by Facebook for developing client-side web applications with React. Flux complements React as a view and complies with the Unidirectional Data Flow model.

Flux can be used when an application has dynamic data and the data needs to be updated efficiently to minimize run time error. The aim behind designing Flux is to produce actions that are orchestrated by a central dispatcher to keep stores updated.

Redux is a predictable state container for JS applications. You can combine Redux with React. Redux helps developers to write web apps that run in diverse environments, act consistently, and are easy to test.

Read: What is MERN Stack & How Does It Works

As React is developed by Facebook, it is still maintained by Facebook along with independent contributors around the world. React’s GitHub Repository has over 165k starts and is among the top repositories on GitHub.

There is a React Developers community of over 110k members that support solving and sharing React related issues, called Reactiflux.

JavaScript XML is a JavaScript syntax extension that is developed by Facebook. JSX aims to expand HTML structures functionality into JavaScript. If a developer uses JSX, there is no need to separate HTML codes from JS codes.

You can utilize declarative HTML syntax in JavaScript code with ReactJS. Developers can pass ReactJS and HTML elements into the tree structure of the browser to easily write clean and manageable code. And using JSX along with Virtual DOM improves the efficiency and performance of ReactJS based applications.

As discussed above, we know that Facebook’s ReactJS is one of the popular JavaScript libraries that is loved and used by thousands of developers. Although it is difficult to predict a language that will be in trend, ReactJS has shown its persistence for the last decade. So be ready to choose ReactJS in 2022 if you are a front end developer.