Cookie Consent by FreePrivacyPolicy.com The Evolution of Web Development & Its Modern Trends The Evolution of Web Development & Its Modern Trends

Looking back to the era where there was no internet is quite difficult. With more and more devices connecting regularly to the internet and the different types of devices evolving, undoubtedly the internet is rapidly growing.

The Internet has truly created a global market where one can get different services and products offered to users all over the world. With the arrival of web applications and IoT, we are now at a phase where it’s possible to interact with the internet in a unique and better way.

The Evolution of Web Development

Web Development was previously only known for the development of web pages and websites for both intranet and internet. However, nowadays it is more like creating web applications that surpass the complexity as well as the size of typical mobile and desktop applications. It can be said, web application development is the artsy method to develop complex business applications to both business (B2B) and customers (B2C).

Due to the modern complexity level, web development is done by a supple software team. This development was initiated as a way to develop apps around 15 years ago. The agile philosophy supports the regular delivery of software with the help of highly-motivated tech professionals. This agile software also supports frequent deliveries, changing environments, and whatnot. The agile team defends technical excellence, continuous improvements, great design, and reflection on how one can become more efficient.

The web today is a never-ending universe in itself. It is interlinked with web apps and web pages along with photos, videos, and other interactive content. What the user doesn’t know is the interplay of browsers and web technologies that makes all the difference.

Web technologies have emerged over the times to offer web designers and developers the skills to make a completely new peer of immersive and valuable experiences on the web to the users. The web that we see today is the outcome of regular ongoing efforts of an open community of web that assists in designing the latest technologies. Some of the techs that are being used today for web development are CSS3, WebGL, HTML 5, Java, React JS, Angular JS, PHP, etc. These technologies also ensure that the website or web app is supported in all web browsers.

During the start of web development evolution from the 90s to the current date, several things have changed and some of the features that were incorporated in its features:

Starting from the 2000s, the web has become a popular platform for the development of the website by using standard web development technologies like HTML, CSS, and JavaScript. At that time the developer used to follow only three steps to get a website or web application working.

With the ongoing changes on the web, the web platform requirement has become more complicated. Coding everything by self took a long period of time. The developers who were using JavaScript needed to upgrade the cycle for every new project. However, with the involvement of web frameworks and libraries were there to solve the problem.

However, in 2020 there is a solution for every web developers problems with customer tools to resolve the problem, i.e.,

The trending technologies for 2020 based on the report of StackOverflow data are:

Since the 2000s’ the number of devices with certain dimension ranges has been multiplied and so are its users. The need to adapt the app on all those screen sizes for the developers has increased.

After some time, the developers have realized the need for an efficient approach for this regular challenge which in return developed the idea of responsive web design.

Backend is not just limited to the browser instead numerous programs can be used to develop it. Some of the previous and latest choices of the developers are:

According to several surveys in 2019, Python was the most admired programming language. 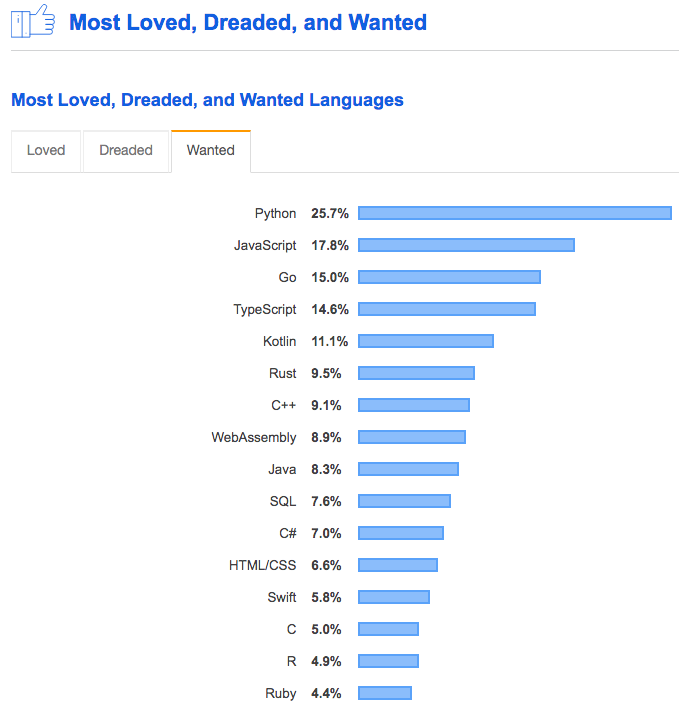 From the origin, Python was always held by its formation and intended to stimulate the process of product development. It is simple, readable, and easy to use that most of the developers like.

Java is an independent object-oriented programming language that uses the virtual machine. It also makes the codes in Java portable to several different platforms. This language is interpreted, simple, and robust that helps in developing all the complex applications.

C# was introduced by Microsoft in June 2000. C# is the combination of C++ and JAVA, which makes it an object-oriented language as well. Its further versions entail the support for component-oriented programming. With advanced support, it helps in building safe and robust apps.

Git is a version control system that enables tracking code changes to make collaboration among the developers faster, easier, and efficient. Before its release, developers used SVN and FTP for checking changes. Also, Git is a much friendlier tool that can be used for the same purpose of tracking changes.

So this was the complete evolution of web development along with the changes that have taken place in the last 20 years. It was a real effort to put all the turning points of the web together in the same article. If you have some of your favorites that we had missed, then let us know in the comments!